"The past seven years of my time here at Rosmini have been an amazing experience that I will never forget. However, this chapter of my life has finally come to an end as we leave the school that has been so dear to us over the years.

Our journey here at Rosmini ended perfectly with the Leaver’s Day. The day started off quite early with breakfast, where all the boys had a chance to reflect on our time here at this school and the memories we’ve made with one another. I had the privilege of leading grace before our meal, and we also said the school prayer for the final time. This was when all the emotions began to well up as the realisation of leaving started to hit.

We then enjoyed our meals and listened to the Head Boy of 2019, Scott Maloney, as he gave a speech about ‘life after Rosmini’ to the year 13s who were about to head on out to the outside world.

The recipient of the Leaver’s Cup was then announced, and the winner, William Forsyth Jones, also known to our year group as FJ, gave an impromptu ‘thank you’ speech of sorts, which definitely lightened the mood of this sentimental breakfast.

Later on in the day we had the Leaver's Mass, which was celebrated by Father Raphael Lobo. This was the last Mass that we would ever have as Rosmini students. Father Raphael used the example of a $20 note in his homily to show us that we will never lose our value and that our time here at Rosmini is an integral part of our lives. His clear and simple message really stuck with me, and I’m sure the other boys felt the same way.

As we concluded the Mass, we sang the Rosnimini Anthem one last time, and the emotions finally kicked in.

Shortly after Mass, we watched the Leaver’s video that was made by Oscar Nichols, John Sombrero, Joshua Bernard, and Rupert Carter, which was a compilation of pictures and videos of our year group from the past seven years. We were also given handmade wooden cross pendants, engraved leaver’s snifters, and custom bookmarks with the school prayer designed and made by the Catholic Character team.

We then signed each other’s uniform shirts, writing messages and affirmations to one another.

The other year groups performed the Rosmini Haka for us, which was very moving, and we performed the Haka to them in response, and once more to Mr Fuiava, who was leaving as well.

Our Leaver’s Day and time at Rosmini were drawing to a close as we year 13 leavers walked down the drive together, the Rosmini flag raised up high as we sang and chanted as a year group. The boys bid each other farewell, and many of us broke down in tears as we said our goodbyes to the brothers that we’ve made here at this school.

This marked the end of our time here at Rosmini, the end of an era, the end of the beginning of our lives. Thank you to all those who made this day so special for us and to all the teachers who gave up their time and energy to make this all possible. May our Lord bless you all this holiday season, and we ask for your prayers as we move on to the next part of our life journey." 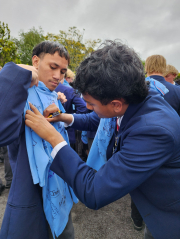 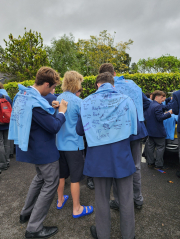 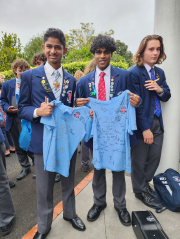 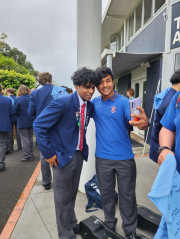