Founder of the Institute of Charity (Rosminians) and of the Sisters of Providence (Rosminian).

More than 150 years ago, a young Italian priest felt driven to write a book about the difficulties facing the Church. The book was The Five Wounds of the Church, and its author Antonio Rosmini.

People of Rosmini’s day were unable to fully take part in the Church's liturgy. The Mass was in Latin, a language few could understand, and most did not understand that the sacrifice of the Mass was the action of Christ himself, sanctifying his people. Rosmini saw that ordinary Catholics knew little about their faith, and were therefore unable to enjoy the Church's sacramental life to the full. He knew that renewal would only come from the renewal of prayer, which meant a renewal of the people's appreciation of the Mass. This insight is central to the teaching of Vatican II: Catholics who attend Mass do so not as an audience but as a congregation that participates in the saving work of Christ.

Connected to this ‘first wound’ was a second: the people knew little about the Mass's meaning because the only ones who could instruct them, the clergy, were themselves unable to do so. Rosmini criticized the outdated teaching methods in seminaries, where instead of studying the Scriptures and works by great theologians, students used textbooks that reduced theology to bite-sized and often inadequate chinks. He also suggested that future priests would be best trained by actually living with their Bishop rather than in isolated seminaries, as "only great men can form other great men".

Because Bishops had a key role to play in the Church – as Vatican II realized – Rosmini wondered whether it might not be better to return to the ancient tradition of the people and clergy of a diocese electing their bishop. Some of the Church’s greatest pastors were chosen in this way: men, such as Saint Ambrose and Saint Augustine, actually drawn from the people they were called to serve. Certainly, he was against the practice, universal in his day, where Bishops were chosen for political reasons by the state. Rosmini saw Bishops as prophets and fathers, not civil servants, which had led them to pull in different directions. He wished them to be united and speak with one voice.

Lastly, Rosmini wanted the Church to be free of state interference, which meant that the Church should be allowed to control its own property. In other words, he wished that state and Church should be recognized as separate, though related, spheres, an idea which forms the basis of the Church’s current teaching on social questions.

Rosmini hoped that his book would be taken up as a useful suggestion of how the Church might adapt itself better to the modern age, but it was not really until the time of Vatican II, when Rosmini had been dead a hundred years, that this came about. Even now, many of the questions raised are still important. The Church knows what it wants on all these questions – the most effective Bishops, and liturgy possible – in other words, a Church that carries out the will of Jesus to teach all nations to the full - but the best way in which this can be achieved is always open to question. Rosmini was one of the first to raise these issues, and to offer some challenging answers too.

"Your Founder [Rosmini] stands firmly in that great tradition of Christianity which knows that there is no opposition between faith and reason, but that one demands the other. His was a time when the long process of the separation of faith and reason had reached full term, and the two came to seem mortal enemies. Rosmini, however, insisted with Saint Augustine that ‘believers are also thinkers; in believing they think and in thinking, they believe. If faith does not think, it is nothing’ (and) he knew that faith without reason withers into myth and superstition; and therefore he set about applying his immense gifts of mind not only to theology and spirituality, but to fields as diverse as philosophy, politics, law, education, science, psychology and art, seeing in them no threat to faith but necessary allies. Rosmini seems at times a man of contradiction. Yet we find in him a deep and mysterious convergence; and it was this convergence which ensured that, although very much a man of the nineteenth century, Rosmini transcended his own time and place to become a universal witness, whose teaching is still today both relevant and timely.” 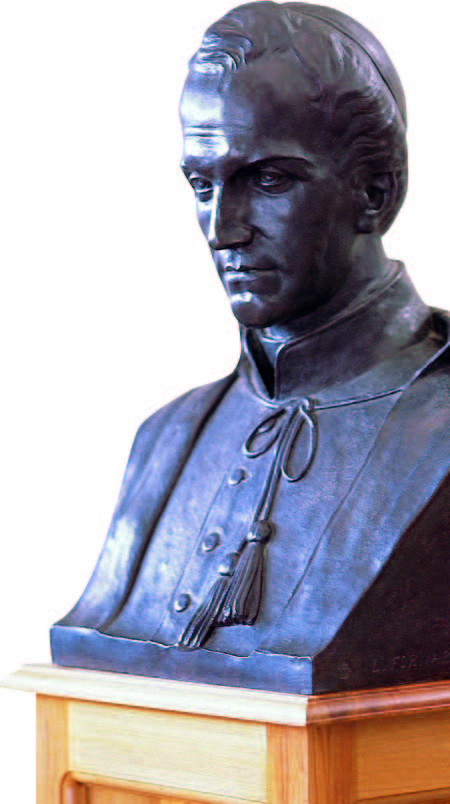